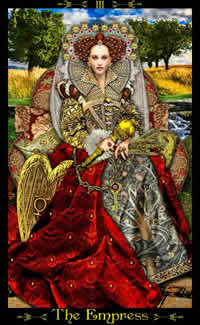 The source of modern day Tarot cards is misunderstood by the majority of people. The urban legend is that the images and text on the decks can be traced all the way back to Egyptian times or were started by gypsies. Most research concludes that tarot cards can be traced back to the same origins as our traditional deck of playing cards (suits of hearts, diamonds, spades, clubs) with which we are all familiar.

The first versions of our modern playing cards were popular in Islamic countries before being introduced to Europe in the 14th century. These Islamic versions of the cards had suits of sticks, cups, coins, and swords. Then in the 15th century French card-makers changed the suits to diamonds, hearts, spades and clubs.

Tarot decks still use the original suits brought from Islamic countries. The earliest deck of tarot cards was painted by hand and created for the Duke of Milan around 1440. Other wealthy individuals in Italy commissioned their own decks of cards and used them in a popular card game similar to our modern version of bridge.

In the 18th century tarot cards evolved from being used in a simple card game. A number of well knows scholars on the occult became fascinated with the images on the cards. These scholars created (made up) a connection between the cards and mystical systems like alchemy, the Jewish Kabbalah, Hermetic philosophy and others.

For example, an amateur scholar Antoine Court de Gebelin wrote that the pictures on tarot cards originated from Egyptian hieroglyphics. This fantasy was proved wrong but not before the idea was accepted by the masses of people. Secret occult societies continued to make use of tarot cards, in their practices, well into the early twentieth century.

The modern popular use of tarot cards started in the 19th century. At that time divination (gaining insight into a question or situation) became a popular form of spiritualism. Tarot cards were incorporated into these divination practices.

Today there is every conceivable style and theme of tarot cards available. The most popular modern day version of the Tarot deck was created in 1909. The academic and mystic A.E. Waite instructed Pamela Smith on how to create the illustrations. The cards were published by the Rider Company. The deck goes by many names like “Waite-Smith” or “the Rider deck”.